There is a small park near my apartment in Taipei where I like to go running.  The park has a track, so most nights there are a fair number of people running or walking their dogs. The park is something I’ve always loved about my neighborhood.   I see the same people and dogs frequently, and it’s nice to feel like part of the community. One recent night, I was walking home from dinner with a friend. For weeks it has been pouring rain day and night in Taipei, but this night the rain finally let up. The crisp feeling in the air after weeks of rain made me eager to get out and take advantage of the weather. I only planned to stop at home long enough to put on my running shoes.

However, my plans quickly changed as our walk home from dinner took us by my park, where I was a bit dismayed but mostly confused to find large crowds of people heading toward the entrance. With a run now out of the question, my friend and I agreed to follow the crowd and find out what was happening. What we found surprised us: a full concert stage had sprung up in the center of the small park and the stage was surrounded by massive screens, flashing lights, a giant pink balloon in the shape of a flower, and more Taiwanese people than I have ever seen in my life. The crowd was cheering, singing, dancing, and waving rainbow colored flags.

Only by looking up at the huge video screens could we see the stage, where a female singer with a big, floppy purple hat and black-rimmed glasses was singing in Chinese. Her hair was long, wild, and dark, and she wore an oversized black coat to protect herself from the December wind. As we quickly learned from others in the crowd, the singer was A Mei, one of Taiwan’s pop megastars. Frequently on tour throughout Asia or in Mainland China where she serves as a judge on a well-known talent show, A Mei was in Taiwan giving an impromptu free concert to promote gay rights, because, as one member of the crowd told me, “A Mei knows that now is the time to fight for gay rights in Taiwan.”

Taiwan’s gay rights movement had already come to my attention since moving to Taipei a few months ago. One Sunday when I was studying Chinese in a local coffee shop, a man approached me and asked me to sign a petition against gay marriage. He said that as an American, I would understand that gay marriage is harmful to children, has unacceptably high divorce rates, and is therefore harmful to society. His statement was striking; I assumed the Supreme Court rulings last spring, initiatives among the states to legalize gay marriage, and public opinion polls would give the world an impression of rising approval for gay marriage in America. His certainty of my support for his cause made me wonder at the international nature of opposition to and support for gay rights, and how gay rights truly are a global debate.

In Taiwan, the petition the man asked me to sign has been a widespread phenomenon in recent months. When I mentioned the petition to one of my good Taiwanese friends, she said it was also being passed through offices across Taipei.   The petition had even come through her office, a government agency where landing a job requires high marks on a daunting admissions exam. All but one of her coworkers refused to sign the petition, and she told me that office gossip attributes the single signature to sympathy for the petitioner.

Taiwan, and Taipei in particular, is known for being among the more gay-friendly places in Asia. Since 2003 Taiwan has hosted one of the largest gay pride parades in Asia. Held annually, Taiwan Pride started in Taipei but has since spread to other cities across Taiwan. Gay bars are commonplace in Taipei, while television programs and movies focusing on homosexual themes have become staples in Taiwanese popular culture. Although recent public opinion polls have consistently found a majority of Taiwanese people support gay marriage, it has yet to become a legal reality in Taiwan. This may soon change, which is the main reason so much attention in Taiwan has been drawn toward gay rights in recent months. Current legislation before Taiwan’s Legislative Yuan, if passed, would legalize gay marriage.

All of this is not to say that gay people have it easy in Taiwan. Recent events indicate discrimination against gay people is commonplace, such as attempts to ban homosexuals from being organ donors and efforts to require political candidates to disclose their sexual orientation as a factor in their qualifications for office. The move to legalize gay marriage has also attracted significant protests in opposition.

A cold night by Taiwan standards, A Mei’s free, last-minute concert didn’t fulfill many stereotypes of a gay rights event. Although glow sticks and rainbows weren’t uncommon, most people were dressed in grey and black. To the casual eye, the crowd looked just like any gathering of Taiwanese people. Yet a close look did reveal some evidence of what drew people outside on a cold night. All too often, I noticed pairs of Taiwanese men suited up in standard grey winter gear, and while not necessarily touching each other, standing closer than is common even in densely populated Taipei.

As an American living in Taiwan I find myself frequently comparing what happens in Taiwan to my experiences in the US, and as someone who supports gay rights, I have to admit I’m far from an unbiased observer. Still, I can’t help but feel that gay rights opponents are making a mistake in the manner they choose to advocate their position. At this moment in America, homosexuality is being publically equated to bestiality by a reality television star while at least some of his supporters are aggressively defending the right to say such things. Across the world in Taipei, A Mei spent a whole night singing songs in Chinese and English about love. On the screens surrounding her stage, giant neon pink letters spelled out, “A Mei”, “Love” and “In Love and Proud.” The crowd held hands and waved flags, sang along with A Mei, laughed with A Mei, and listened solemnly while she spoke about the need to support true love. For the cause of gay rights, A Mei gave a free concert in a park and talked about love, and it was a powerful message.

A Mei’s message of love was so simple and shamelessly joyful that it even drew in other members of the neighborhood, who like me found themselves accidentally attending a gay rights concert. Stout grandmothers decked out in knitted winter hats and thick winter coats could frequently be seen in the crowd, and small dogs wearing sweaters often trailed closely behind. Instead of simply walking through quickly, I saw many elderly women dancing and clapping while their dogs excitedly trotted from stranger to stranger, as if they were the true hosts of the event. On this night the park regulars were in full attendance, we just happened to be joined by a crowd of 20,000 people and a full-fledged pop concert.

At one point A Mei sang “Amazing Grace.” My first reaction was surprise: in America right now, gay rights opponents often tout Christianity, so I can’t help but associate Christianity with opposition to gay rights. During this song, the crowd was relatively quiet, not seeming to know the words or the song. I puzzled over why A Mei, who as far as I know doesn’t speak English, would choose this song among all others. My friend, who’s German and doesn’t know much Christian culture, let alone Christian music in English, shrugged the song off as another moment of the night she viewed as an outsider. I had the odd feeling that I was witnessing something thought-provoking and complex but that I was somehow seeing it alone.

The other English song A Mei sang was toward the end of her concert, and was John Lennon’s “Imagine.” As an American living in Taiwan, I am always contemplating Taiwan and my affection for Taiwan, while at the same time I never cease longing for my own country and caring deeply about what happens in America as well. This past spring the US Supreme Court gave some of my very closest friends the right to marry the people they love. It’s an amazing gift, but a tiny bit bittersweet for me, as it means my Fulbright year in Taiwan will prevent me from being at a very dear friend’s wedding. As A Mei sang John Lennon’s words, I thought to myself that if I can’t be with my friend on his wedding day, I can at least be with gay people in Taiwan as they strive for the same freedom.

Kimberly Wilson is a a Ph.D. candidate in the Department of Government and Politics at the University of Maryland. Her research focuses on Taiwan’s maritime and territorial claims in the South China Sea.
Post Views: 640

Kimberly Wilson was a doctoral student studying international relations and comparative politics at the University of Maryland-College Park. She specializes in territorial conflict and East Asian politics, having lived in Asia for a total of four years. She is currently an Assistant Professor at East Tennessee State University.

Daniel Indro: The Next Asian Tigers? Economy in ASEAN

Reflections on the Process of “Becoming” in Taiwan

A Day in the Field with Kristina Chyn

Storytelling, Trash-chasing & Break-dancing: An Inside Look at an Iranian-American Girl’s Journey through Taiwan 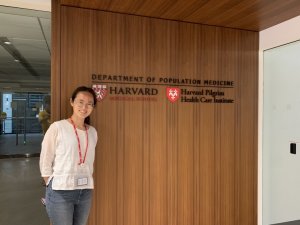