This past year has been a whirlwind of changes for me. When I first landed in Taiwan, I only had a surface-level understanding of its people and culture. I had just finished a year-long program in China and was excited to experience something different. At the time, I had expected to enjoy my stay in Taiwan, but I did not expect it to dramatically alter my views about the world or my path in the future.

At the beginning of my first semester at National Chengchi University (NCCU), I felt that the coursework was structured much differently from how I imagined a master’s program. The onus was on the students to push themselves with the content, and the professor did not explicitly put many requirements on the students.

Nonetheless, I found the classroom discussion to be incredibly fascinating and something that I would not have been able to find in many other programs. This was because the cohort was made up of students from all around the world. I was often the only American in the room, and thus, I heard many different perspectives. Moreover, my professors were often current or former officials for the government. This helped me get an inside look at what the Taiwanese government had done in the past, particularly regarding Mainland China affairs.

On one occasion, a professor (who seemed to lean toward the KMT and was the former head of the Mainland Affairs Bureau) challenged students on what the alternative to the ’92 consensus would be and how it would be possible for Taiwan to distance from China. He made good points about the need for Taiwan to keep a reasonably positive relationship with China, and it tempered my own attitudes about this issue.

In another class, a professor (who seemed to lean toward the DPP) made good points about why getting too close to China poses many risks for the island. The diversity of opinions gave me a rich and complex understanding of the cross-strait relationship that I could not receive on the mainland or to such an in-depth extent in America.

The following semester, during a course with two highly respected professors, I was also repeatedly challenged to question my assumptions about the cross-strait relationship, making me realize there are no easy answers to this issue. I also discovered many of the mistakes America has made in the process of handling the issue. 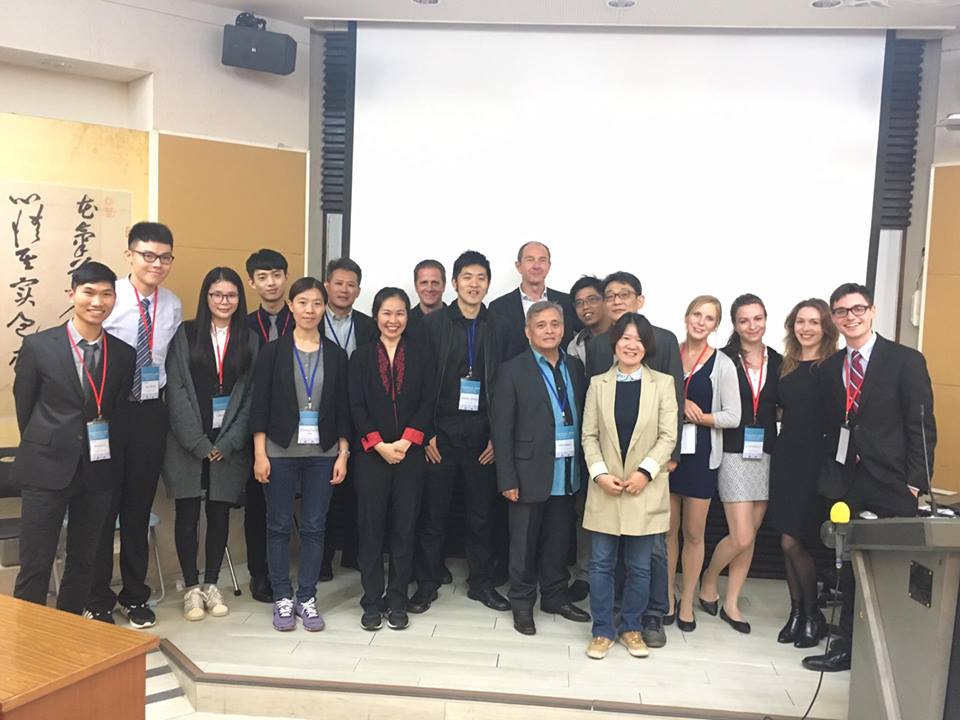 Connecting with the Local Taiwanese

During my daily life, I strived to meet young Taiwanese from all walks of life across the island; they were important for teaching me about Taiwanese identity and the history of Taiwan. I didn’t want a repeat of my China experience, in which too much of my time for the first half was spent with other Americans. As such, I made it a goal to increase my interaction with locals.

In my first semester, my primary engagement with Taiwan’s civic society was through Buddhist groups and participating in the LGBT parades/protests.

I often volunteered to help Buddhists promote vegetarianism and went to a Buddhist temple on several occasions. I even went with Buddhist monks to Nantou, where we participated in a festival attended by people from all around the region. It was unlike anything I had experienced before and gave me insight into the spiritual and religious community, insight that is impossible to understand from literature alone. The welcoming nature and passion of young Taiwanese people inspired me. It was such a stark contrast to what I had experienced in Mainland China, where many young people often don’t want to get involved in politics, or only want to join the CCP for career advancement. Instead, I met and saw people that truly cared about improving their country and were fighting to make Taiwan a better place.

Over the winter break, I stayed with a Taiwanese friend, whose family brought me in as one of their own. I spent the Lunar New Year living in a rural farmhouse and speaking with elderly communities. Their hospitality—and many others’—always made me feel so welcome in Taiwan. I even received a hongbao (red envelope).

Later, I went down to Kaohsiung, where I met with people interested in promoting and researching basic income. This is where my connection with Taiwan truly started to deepen. They listened to my background with universal basic income (UBI) and why I support the policy; then they told me why they believed it would be a good policy for Taiwan and how it could help their family. We started to cooperate and brainstorm on different ways to facilitate this discussion throughout Taiwan so that more people would understand Taiwan’s challenges of inequality, precariousness, and how to address them. By that point, I had already begun planning an international conference at NCCU on basic income in the Asia Pacific. The team in Kaohsiung enthusiastically offered to help me in any way they could.

One of the challenges I found in Taiwan was a lack of understanding of Taiwanese institutions and how to work within them. I was used to my previous school, which was easy to navigate because I already had established relationships and credibility. At NCCU, I had to build these relationships, as well as my credibility, from scratch. While planning the international conference, I ran into several issues with bureaucracy and lack of trust. It was understandable from their end because I was planning something on a large scale, and they had never worked with me before. It was also difficult because I was not fully aware of their expectations or the indirect communication they were signaling.

Through a great amount of work (and the incredible people that helped me at IMAS, including Fannie Lin and Director Mei-Chuan Wei), I was able to put all of the necessary arrangements for the conference together. I did not realize how much effort would go into this process. Later on, I was able to connect with more students, both local and international from NCCU and other universities, who provided me invaluable help in setting up the conference.

The actual conference was an incredible success beyond what I expected because of the enormous support I received from people around Taiwan and the international figures in the basic income movement. Several regional and international experts came to Taiwan to speak at the conference, and many others spoke over Skype. Over 100 people participated, including many professors from NCCU. The Director of IMAS took on a large role, attending the entire conference, and other administrators also attended throughout the day and even spoke at the opening of the conference. Representatives from the East Asia Labor Union located in Singapore attended, as well as a reporter from Hong Kong’s South China Morning Post, who did several reports on our progress. A representative from the Executive Yuan’s Youth Committee and colleague of Audrey Tang attended the conference to give a report to the committee.

At least 1,000 people watched the conference online and another 1,000 listened to the simultaneous Chinese broadcast. Additionally, the conference Facebook page saw 35,000 unique impressions that day, demonstrating the enormous reach we had in Taiwan. My professors at NCCU were incredibly impressed with our success, and it established firm ties with the university and the community. Later on, professors at other universities and institutions told me that they heard of me because of the conference.

After the completion of the conference, I traveled with the coordinator of UBI Taiwan and the Swiss referendum leader to visit Hualien, the possible location of a future basic income experiment in Taiwan. We met with local figures and started to create relationships in the area.

Because of the conference, the director of Taichung’s Social Affairs Bureau invited my team to meet to discuss the potential for an experiment in Taichung as well. It has been a truly unique experience working with government officials on a project that can eliminate poverty. They have dedicated resources and time to help us gather data, and have furthermore offered to establish an office for us in the new International NGO building in Taichung.

Prior to coming to Taiwan, I did not expect that I could make so much progress in persuading important figures in Taiwan to work with us in such a short period of time. Since then, my team and I have coordinated with Taichung to choose a location for a potential pilot program, which we have visited and created relationships with the local leaders. We asked them about the challenges of their community, and it was fascinating to hear about how these villages were slowly dying because of the lack of opportunity and development.

As I progressed through my second semester, I continued to make connections throughout Taiwan. For instance, I connected with a professor in Academia Sinica, who helped me place a question about support for UBI in the upcoming national survey for Taiwan; this will be the first time UBI has been surveyed in Taiwan. Through Academia Sinica, I also met Peter Huang, a famous activist in Taiwan focused on promoting UBI this year. Academia Sinica will help me publish my essay on Taiwan’s UBI potential. In addition, various groups have started to join us and work to organize a larger NGO. During this time, I also used my class time to connect my civic engagement with my studies, working with my professors to research related issues. My professors have been incredibly supportive and provided much guidance as well as connections.

After all of this work, I will combine all of my research and work into my master’s thesis. In fact, I hope to continue my work here in Taiwan after I complete my Fulbright grant, because I believe that there is huge potential for Taiwan to have a nationwide discussion on UBI, and lead East Asia on the issue, as they have done already with gay marriage. I have grown to sincerely care about the future of Taiwan; it is a truly special place in the world, and I want to work with the Taiwanese to find solutions for the economic issues they face. It is because of Fulbright that I have been able to not only thoroughly deepen my own understanding of Taiwan and the region, but also work with Taiwanese locals to launch an important discussion about inequality and the future of work.

Tyler Prochazka grew up in Kansas, later attending Western Kentucky University to participate in their historic speech and debate team. While at WKU, he completed the Department of Defense's Chinese Flagship program and received BAs in Economics, International Affairs, and Asian Religions and Cultures. Currently, Tyler is part of the leadership of UBI Taiwan, a research assistant for the U.S. State Department focused on Artificial Intelligence, and is the features editor for Basic Income Earth Network's news division.

An Unexpected Journey: How I Became a Master’s Student in Taiwan

Lessons from my Mini-UN: Teaching History in an International Classroom