My International Education Administrators trip to Taiwan was full of delightful surprises, including wonderful food, amazing Taiwanese people and unforgettable new colleagues from the U.S.  There are countless moments that struck me during my two weeks in Taiwan as we visited 16 universities and five foreign agencies.  Overall, I felt honored to be a Fulbright and to be included in this inaugural experience.

During our trip to Taiwan, we met the minister of Foreign Affairs.  She was gracious and answered all of our questions.  We met her again at the Fulbright dinner and she greeted us again. She illustrated a fact that I found to be true of the Taiwanese people I encountered—hospitality and kindness.  We were welcomed at several universities and they each had distinct characteristics and charms.

I was impressed by the first university-Soochow University.  They had an onsite Chinese Language program with living quarters for students. This would be ideal for Tuskegee University faculty and students. Also on this day our group visited the National Palace Museum, which was a wonderful introduction to Taiwanese material history.

We had a short visit to the American Institute in Taiwan, where once again we learned about the “One China” policy and American diplomatic policy with Taiwan.  It gave us a context for Dr. Vocke’s lecture on how Taiwan can be viewed as either independent, an extension of China or historically linked to Japan.  In other words, Taiwanese history has a lot of layers to it.  This history was also reinforced later during the first week at the Academia Sinica.  For a novice in Taiwanese history, these lectures in history and geology were great. They provided a framework for the trip. There was a lecture on geology that even helped explain the sharp climate change we experienced on the trip.

The trips to universities varied as much as the weather did.  We visited a Performing Arts School where we saw an opera.  We had a tour of the opera museum and had an opera explained to us. I was struck by the discipline of the young students, as well as the hard work of the two ETAs on site.  The black operatic face represented valor and honor; the white operatic face represented distrust and evil.  I found that interesting because in most European contexts black is always evil.  This was a refreshing portrayal.

On the same day as National Taiwan College of Performing Arts (NTCPA) we visited Tamkang University (TKU). TKU had an impressive Chinese Language Acquisition program as well as academic programs for students who needed courses offered in English.  On an odd note, they offered a program in Future Studies that seemed to lack any real definition.  Overall, this university was a great visit.  They were hospitable, offering a great dinner, a chance to meet the president and a wonderful red and white gift bag with the words “Global Change.” Unfortunately, I left my umbrella in the TKU’s Blue and White Café.

National Taiwanese Normal University (NTNU) was a special university for me.  It was the day that I was our group’s representative.  We were received well by Dr. Chi-Yo Hung.  The seating arrangement was open, and everyone was on burgundy sofas and armchairs. It was as if we were in an Oprah Book Club, and Dr. Hung and I were in the center.  This was a bit different from other visits that had tables and chairs and name tents.  It made the environment very hospitable.  We had another presentation of Taiwanese geography and of course, a detailed background on the university programs. NTNU would be a great school to work with, but their focus is on Education and Tuskegee focuses mostly on STEM disciplines. They gave a wonderful gift of a scarf.

The university that stood out the most to me, but maybe not for a good reason was Ming Chuan University (MCU).  We visited their cultural rooms, where they teach students about Japanese and American culture.  In the American culture room, they had a room full of confederate flags and American flags with a picture of George Washington Carver, President Barack Obama and Robert E. Lee.  Robert E. Lee is described as an American hero.  The room has so many confederate flags that it looks as if they are being celebrated as an essential part of American culture.  As an African American from the South, I was only intrigued, not offended.  Obviously, the school needed some help with this room.  I would love to have students from Tuskegee, and another predominately white school study and dialogue about how to change this room to more accurately reflect the history and culture of America. I was glad George Washington Carver was represented as he is a famed scientist from Tuskegee University.

Moving out of Taipei, I felt the universities were less accessible to students.  However, Wenzao in Kaohsiung clearly had a superior language program.  Additionally, National Sun Yat-sen University (NSYSU)  offered multiple programs and a wonderful environment.  However, Tuskegee does not offer Marine Biology, which is NSYSU’s strength.

The opportunity to travel to the Southeastern part of Taiwan was phenomenal.  Meeting the ETAs in this area gave me insight on their experience and an idea of the portfolios of successful ETA candidates.  The activities in Kenting, Jiaoxi, Tiatung, Kaohsiung, and other locations in the South were well planned and provided a balance of visiting universities, getting to know ETAs and sightseeing.

My favorite moment was visiting Syue Jin Elementary School and receiving hand-carved chopsticks from the students. These chopsticks seemed to epitomize my trip to Taiwan.  I came to Taiwan unfamiliar with the culture or even the basics of using chopsticks.  I left with a new handle on the culture, a love for the food, the people, and a yearning for more.  I hope to bring this attitude  to my university as we seek to expand our global programs and find a match for both Chinese acquisition and STEM education. 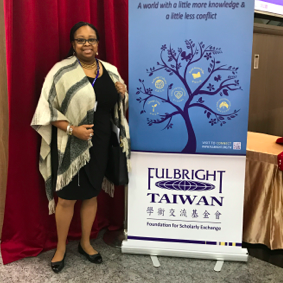 Dr. Rhonda Collier is a Professor of Modern Languages and Communication at Tuskegee University in Tuskegee, Alabama, USA, where she also serves as the Director of the TU Global Office. She has a Ph.D. in Comparative Literature from Vanderbilt University, and she is a Fulbright Scholar, who studied at the Universidad de São Paulo in Brazil. She has published in the areas of Afro-Brazilian, Afro-Cuban, African-American, and global hip hop studies. At Tuskegee University, she focuses on American literature, Black American literature, and composition courses with an emphasis on service-learning. Her most recent work Culturally Responsive Teaching and Learning in Higher Education, co-edited with Dr. Octavia Tripp was released by IG Global Publishing on August 12, 2019. Dr. Collier is passionate about education abroad and cross-cultural student engagement.

My Fulbright Journey in Taiwan: Language-Discordance as a Social Phenomenon

Monica Yang: Determinants and Performance of Cross-border Mergers and Acquisitions