Reflections On Finding Community and Confidence in Graduate School

When I started my master’s degree program in Asia Pacific Studies at National Chengchi University (NCCU) in fall 2017, I considered myself well-read on the topics I wanted to research; I had done my undergraduate capstone projects on Taiwanese democracy and cross-Taiwan Strait relations, and I had practical knowledge of the cultures and societies of the Asia Pacific. However, I spent the majority of my first year in graduate school struggling to find a topic to tackle for my Master’s thesis. Did I have anything important to say about the state of China–Taiwan relations? Would my future career hinge upon the project I decided to pursue? Would the topic I choose paint me into a corner of academic expertise? Did I even know how to start writing a thesis? These were the worries of a grad student hurtling toward an uncertain future after graduation.

By the time summer vacation started halfway through my master’s program, I found that the experiences I had through Fulbright Taiwan sparked my interest in the role of students in international exchanges. In the States, I had work experience mentoring international students, and I discovered that my research background in China-Taiwan relations could form the background of my project. Although I had examined cross-Strait integration between Taiwan and China in my previous work, I repeatedly found that academics tended to cover business and tourism links between the two sides. Student exchanges in higher education between the two sides of the Taiwan Strait have been relatively understudied partially because linkages in higher education started relatively recently in 2011. By building on my previous work about the efficacy of the “linkage community” framework in cross-strait business and tourism, I wanted to learn more about the state of student mobility between China and Taiwan and discover the role these students play in increasing understanding and cooperation among people of the two sides of the Taiwan Strait. By the end of spring 2018, I determined that I wanted to explore the people-to-people ties developing between the two sides of the Taiwan Strait despite periods of political tension since 2011.

Summer 2018 came and went, and although I had a seed of an idea for my master’s thesis, I knew that I needed to devote more work to growing this idea into a fully realized and feasible thesis topic. I talked to classmates, friends, and professors about my idea, but the details of my research plan remained elusive. I felt ahead of the curve in starting my master’s thesis, but the weight of uncertainty made me hesitant to begin the research.

The fall semester of 2018 started, and I decided to dedicate myself to my coursework, which ultimately informed the direction of my thesis. Visiting professor Shirley Syaru Lin taught an eye-opening course called “The High-Income Trap in East Asia,” which focused on the complex, contemporary social issues arising from the last half-century of economic development and liberalization in Japan, Korea, Taiwan, Hong Kong, and Singapore. The final paper I wrote for that course helped me to finally distill my thesis idea into a workable topic: investigating the factors that attract Taiwanese students to Mainland China in higher education. I read extensively on the development of Taiwan’s higher education system, the contemporary trends of overexpansion in higher education, overeducation in the younger population, and mismatch between graduate qualifications and job market supply. Though excited to start work on my thesis proposal, I still found myself struggling logistically. The NCCU webpages might provide one answer to a question, whereas the student handbook and other materials would give a contradictory one. Cautiously, I began to write my thesis proposal over winter break in February 2019.

As I talked to classmates in my program, I found that I was not alone in my confusion. Out of this need to share information, commiserate in our common research woes, and find a social outlet amongst all the work we do, my classmates and I established an informal group that became known as Thesis Club. We decided to meet every week on campus to wrestle with our thesis topics, writing challenges, and paperwork confusion together. Our first meeting in March laid the groundwork for a network that ultimately helped me both to understand thesis requirements and to develop confidence in my own abilities and ideas as a researcher and a writer. I felt confident that the proposal I wrote over winter break was ready for defense.

Every week in Thesis Club, I chatted with my classmates about all things thesis, such as how to put together the thesis proposal, which forms needed to go to which office for signatures, how to format the margins in word processing software, how to communicate with busy professors, and which snacks to serve at the proposal defense. As international students, we were all attempting to navigate a university bureaucracy that differed widely from those of our home countries. As classmates finished the thesis proposal process one by one, the rest of us learned from them how to approach the defense.

By mid-March, I was ready to assemble my proposal application. As my paperwork progressed slowly through the university administration, I could turn to Thesis Club to stay connected to my classmates and discuss our triumphs as well as our struggles. We all found solace in knowing that although our individual research journeys had many different forms, we shared common challenges in navigating an unfamiliar administrative system in the university.

By early April, I finally scheduled my thesis proposal defense, which was the first time my work had ever been laid bare for critique so openly. As I presented my plan for my research and listened to the committee’s feedback, I realized that the thesis committee truly wanted me to succeed. As I mulled over the notes I took in the defense, I found bits of valuable advice that motivated me to focus on the content of my research.

In the two months following my proposal defense, I experienced moments of success, failure, frustration, and introspection. Because data on Taiwanese students in mainland China are relatively scarce, I turned to methods of generating my own data to support my arguments. My project evolved from finding interview participants who had experience studying in the mainland at all levels of higher education to contacting cram schools in Taiwan whose students apply to mainland graduate schools. These routes led to many dead ends before I serendipitously met a higher education professional who graciously offered to take my open-ended questionnaire to China with him on a trip to the mainland. With the fate of my primary data collection in someone else’s hands, I turned to other chapters of the thesis and continued to promote Thesis Club to my classmates.

Eventually, our department’s office caught wind of our weekly Thesis Club meetings and offered to throw a department-sanctioned welcome party to encourage more students to join our conversations. We invited first-year students to learn about the early stages of the thesis process, and we offered mentorship as they started thinking about thesis topics and finding an adviser. As international students in a Taiwanese university, we discovered through Thesis Club that our peers were the best source of support as we navigated the thesis process.

As I pushed my thesis research toward completion, I joined a small team of classmates working on an article for a professor in the education department of my university, the topic of which closely aligned with my thesis research. As I started discussing plans for this article with the professor and my classmates, I discovered that my former anxieties, stress, and feelings of inadequacy were ill founded, and these feelings held me back in some ways during my first year of graduate school. I learned that I understand how to conduct research, that I do know what I’m talking about when I present my work, and that my writing is a powerful form of sharing my ideas with my community. The process of writing my master’s thesis and finding support in my own community of colleagues enabled me to develop the self-confidence to match the abilities I always had.

Moreover, the process of writing my master’s thesis refuted past notions I held of academia. Whereas I had always thought of academics as solitary workers focused on their own areas of expertise, I found that academia revolves more around discussions within communities and the exchange of ideas. The community of colleagues I found in Thesis Club gave me the confidence to stand by my ideas, offer support to my colleagues, and create a master’s thesis that I hope to draw upon in upcoming years. 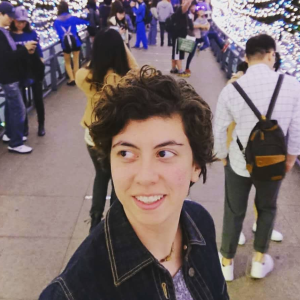 My Fulbright Program in Taiwan

Reflections on Failure and Resiliency in Taiwan