With only five vibrant weeks to go before the conclusion of the spring 2018 semester in the Department of Ethnic Relations and Cultures, College of Indigenous Studies, at National Dong Hwa University (NDHU), I find it a bit hard to sum up this extraordinary and rich semester. Part of it is due to my reluctance to put myself in a farewell mode. The experience could be described as living my dream, to quote my dear fellow Fulbrighter Lillygol Sedaghat!

What a dream this has been, fusing my many worlds seamlessly: Taiwan and the U.S.; academic and personal; scholarly and activist. All the while, I have served to the best of my capacity as a cultural ambassador. When I applied for a Fulbright 22 months ago and envisioned what this award would mean to me, the experience has stayed true and close to what it is intended to be: to contribute greatly to the intellectual and curricular vigor of the College for Indigenous Studies and NDHU. By teaching courses that offer cutting-edge scholarship intersecting Indigenous studies, gender studies, and women’s studies, I add vibrancy to the Department of Ethnic Relations and Cultures, College of Indigenous Studies, and NDHU.

Indeed, this Fulbright semester has proven to be greatly beneficial on many levels, much as designed. My presence in Taiwan has furthered my transnational networking with women’s and gender studies colleagues in Taiwan as well as with Indigenous feminists through a collaborative writing project regarding Taiwan Indigenous feminism and postcolonial feminism. Additionally, it has dovetailed wonderfully with two book projects on transnational Indigenous Studies, which would bring together Indigenous and non-Indigenous educators and scholars dedicated to Indigenous studies and feminist studies in the global, transnational context. The book projects would be an extension of a dossier, titled “Transnational Indigenous Feminisms,” that I have edited for the fall 2016 issue of Lectora, a journal based at University of Barcelona, Spain, dedicated to women’s and gender studies. I continue, albeit slowly, to work on my own writing of the book proposal on transnational Indigenous feminisms during the semester at NDHU, present on the subject, and include it in my graduate seminar on postcolonial feminism.

Impact on My Teaching and Professional Work

Given my network in higher education as well as in the Indigenous community, particularly with feminists from the Amis, Atayal, Kanakanavu, and Tsou nations, I have been able to grow a wider network. The Indigenous feminist conference and workshop that I co-organized in spring 2018 is a case in point. Given the location of the College of the Indigenous Studies, I have been able to facilitate and program several visits regarding Indigenous feminism by bringing together Indigenous feminists, thinkers, and educators. All of this, as part of the university program, can be incorporated into the graduate seminars I teach on gender studies and postcolonial feminism. My Fulbright teaching and speaking engagements have deepened my knowledge in women’s and gender studies in the U.S. as well as enriched my ongoing work in transnational Indigenous feminisms.

The Fulbright teaching in Taiwan has already proven instrumental on many levels. For one, I have been able to infuse materials concerning Taiwan Indigenous feminist work and production into my own teaching. I will be able to bring what I used into the programming at SCSU, as well as my ongoing women’s studies work in the U.S., particularly in presentations at the National Women’s Studies Association (NWSA).

I have been able to network and collaborate widely with colleagues around Taiwan working on gender, women’s, and Indigenous issues, both in academia and off. Upon my return, I am sure to share my knowledge and present at the annual two-week session on Indigenous issues held every spring at the United Nations, the Permanent Forum on Indigenous Issues (UNPFII), and the annual conference of the National Women’s Studies Association (NWSA).

For example, fellow Indigenous feminist Skaya Siku and I have been invited by Dr. Jo-Anne Lee, Associate Professor of Gender Studies at University of Victoria to speak in the Lansdowne Lecture series and engage with other communities in Victoria, British Columbia, in fall 2018.

Use of the Fulbright Experience upon My Return

On the collaboration across institutions, between SCSU and NDHU, I see the possibility of faculty collaboration and exchange beyond my Fulbright semester. At SCSU, given the university administration’s encouragement and promotion of international education, I would finally have an opportunity to explore an SCSU study abroad program. This would mark the first study abroad program of SCSU in East Asia. Further, given all the academic contacts I have gained through the Fulbright experience, I plan on capitalizing on the connections by building a faculty exchange program between NDHU scholars in Taiwan and SCSU. Indeed, I see tremendous opportunities growing out of my wonderfully productive semester of Fulbright teaching at NDHU. It is but the start of many productive, meaningful, and lasting connections between faculty and students of the two institutions, SCSU and NDHU—and for the networks of academics and scholars I am part of in both the U.S. and Taiwan.

In all, my semester in Taiwan under the Fulbright U.S. Scholar Program award has already been greatly beneficial to NDHU, to SCSU, to myself, and to the increasing intersecting and growing field of Indigenous Studies and women’s and gender Studies. The Fulbright award provides me, NDHU, and its College of Indigenous Studies the opportunity to expand the intellectual inquiry from the lenses of gender studies and feminist studies, to collaborate on Indigenous and feminist research, and to build and re-connect with academic and professional networks in Taiwan. Indeed, I can surely say that I have been able to serve wonderfully as a cultural ambassador for which my entire education and career have prepared me.

Below please see a breakdown of the events/programs and flyers during my Fulbright semester in 2018:

My graduate seminar, “Postcolonial Feminism,” is held on Tuesday, 2:10-5 p.m., from February 27th~June 26th, 2018. The class, a most dynamic group, has 6 officially enrolled in the course, and on average, every week, there is an attendance of 12 people, aged between 20 and 75, which include faculty (3 colleagues from Department of Ethnic Relations and Cultures), doctoral and master’s students from both Ethnic Relations and Cultures and English Departments, and two undergraduate students.

I have organized or co-organized the following programs featuring feminist and Indigenous activists/educators during my Fulbright semester at NDHU:

(3) 5/1: Dr. 楊翠, from the Sinology Department at National Dong Hwa University, on her two-volume publications, titled【少數說話】, on Indigenous women writers and an analysis of their literary creations, from 2:10-3:30 p.m.

Of course, what I have done at NDHU extends beyond what is prescribed above. They include (1) advising students (doctoral, MA, and undergrad) on their academic pursuits; (2) collaboration with colleagues, such as Dr. Kerim Friedman, on my participation in the International Ethnographic film festival (5/2-5/5), and Dr. Jolan Hsieh, on programs such as the screening of Sioux film director Myron Dewey’s Awake: A Dream from Standing Rock (6/5); and (3) attendance at programs organized by 臺灣查某；地球公民 (5/8)；or English Department in bringing Dr. 張小虹, to speak on 張愛玲 (5/21).

Talks in Taiwan, outside of NDHU:

to visit the Center for Women’s and Gender Studies, National Cheng Kung University

Indeed, my intellectual life extends beyond the classroom. There are many moments outside the classroom and the NDHU that add to the enrichment of my Fulbright project. Take the following three that stand out in my recollections:

(1)3/24: I spent a full day connecting with two women’s studies, gender studies, and Indigenous studies colleagues as we toured 阿嬤家 | The Ama Museum in 大稻埕. The museum itself is a powerful testimony to the good work on human rights and women’s rights being done in Taiwan.

(3) 5/18: Michael Bérubé’s talk at NTNU on the advancement of humanities and the humanities centers and institutes

While being away physically, I have continued with two co-edited book projects/proposals and a co-authored article on postcolonial feminism:

The richness of this Fulbright semester in class really cannot be fully measured, as the fruits of the labor may not be seen or realized for a while. I suspect there will be many collaborations come about, in scholarship and academic programming/articulation. This Fulbright semester has allowed more time and reach further into my study and understanding of Taiwan Indigenous women’s cultural productions.

Then let me not forget to mention an idea we have considered for a reunion of a few Fulbright fellows, including Jennifer Huang, Alisha Jihn, and Elaine Ng, together by bringing their art projects for a forum to my home institution, Southern Connecticut State University.

(1) A proposal has been made by Dr. Chou-lan Chern, Dean of Liberal Arts at NTNU, on May 17th, 2018, to establish articulation between SCSU (my home institution) and NTNU (my undergraduate alma mater). There shall be earnest explorations and discussions for the next steps towards the materialization of the proposal upon my return to the States.

(2) Dr. Sulin Yu, Professor of English and outgoing Co-Chair of Center for Gender and Women’s Studies at National Cheng Kung University, has proposed a joint endeavor in our collaboration of transnational feminist pedagogy. Motivated by the NCKU’s 生根計劃 re transnational pedagogical endeavors, Dr. Yu has proposed to partner for her graduate seminar in transnational feminism, for fall 2018. where I will serve as the international speaker. The long-term goal is that we will eventually collaborate and co-teach “Transnational Feminisms” together, in two institutions (NCKU and SCSU) in two countries, two continents in the very near future.

Life in Taiwan while on Fulbright:

Indeed, it has been very much of a homecoming, on many levels profoundly. For the first time in over 30 years, I have spent an extended time during the spring months in Taiwan, which allows me to celebrate many momentous occasions, including Lunar New Year, Qingming, Mother’s Day, Dragon Boat Festival, and six birthdays (including my mother’s)! It has meant homecoming to several alma maters: 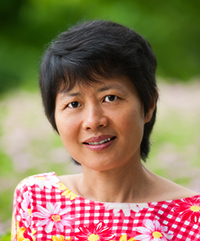 A 17th-generation daughter of Taiwan, Yi-Chun Tricia Lin is Professor and Director of Women's & Gender Studies at Southern Connecticut State University. She is former President of National Women's Studies Association, 2012-2014. Her Fulbright work, titled Indigenous studies, gender studies, and feminism, is part and parcel of her book project on transnational Indigenous feminism.

My Fulbright Program in Taiwan

Evaluating America: Reflections on Perspective in the International Community