In the fall semester of 2014, I taught a seminar on American philosophy to graduate students in the Philosophy department at National Taiwan University.  The main focus of the course was on the work of John Dewey, an American philosopher who, along with his wife Alice, spent over two years in China (1919-1921).  The timing of their stay could not have been more momentous.  They arrived in China on May 1, 1919, three days before the student uprisings of May 4, 1919.  This episode is part of a period now known as the May Fourth movement, during which Chinese thinkers engaged in vigorous debates over traditional customs and values.  During his visit, Dewey travelled, lectured, and wrote extensively about his experiences in China.  As my students and I read his philosophical works, I am working through Dewey’s own writings from this period: his personal letters, essays, and lectures.  What I’ve discovered has enriched my Taiwan experience very much.

Obviously, much has changed since John Dewey visited the Republic of China in 1919.  Among the most important changes is that the Republic of China is now located on Taiwan.  Despite this geopolitical change, what is most striking is how many of Dewey’s observations remain the same, especially with respect to the lives and values of the Chinese people.  This is my first visit to Taiwan, and as I read Dewey’s reflections and observations from nearly a century ago, I feel as though he could be reporting on the daily happenings in my own little neighborhood in Taipei’s Da’an (大安) district.

John and Alice Dewey took note of the little things, and there remains the same quality of bustle they describe: the children off to school, the smell of the breakfast stands, the familiar faces in the lane, the friendly greetings, and everywhere the manifold preparations that go into the daily rituals of food.  China is recognized as a great food culture, and it is probably the greatest.  The Dewey’s certainly appreciated this part of Chinese living.  During their stay, they went “right on getting fat on delicious Chinese food,” or so they reported to their adult children in a letter dated June 7, 1919.

During his years in China, Dewey noticed and appreciated something special about Chinese culture.  He tried to put his finger on what it was.  In his early writings, we find him struggling for the words.  He observed in a letter to a colleague that the Chinese were “very human.”  Around that same time, he wrote in an essay that, “human nature as one meets it in China seems to be unusually human, if one may say so.”  These are rather ambiguous observations.  Over time, as his experiences in China deepened, Dewey’s insights took on clearer form, and he arrived at firmer sociological conclusions.

The Chinese, Dewey observed, were moderate in temperament, courteous, generally cheerful, and eager to resolve misunderstandings before they arose, preferably through indirect and informal mechanisms.  He wrote that if there were any “single key” to understanding such traits, then it was that the social environment in which the Chinese people lived was characterized by “direct face-to-face intercourse.”  People were practically all connected.  The people with whom one lived were those with whom one would continue to live, come what may.  Given such consistency of contact, one could not easily hide away from others in the Chinese world.  There were few secrets, and everyone would see the consequences of someone’s actions.  Such living is what Dewey identified as “face-to-face.”  The fundamental unit in such an environment was not the discrete individual, but the community.  This feature, Dewey believed, was what made the Chinese people so remarkably “human” in their habits and attitudes.      The social cohesion that Dewey observed in China agreed with many of the liberal values and convictions that he held for all of his life.  “Individuals who are not bound together in associations, whether domestic, economic, religious, political, artistic or educational, are monstrosities,” he once wrote.  Dewey always believed this to be true.  For him, what it meant to be “human” was to be importantly involved in the lives of other people.  If words like “freedom” and “democracy” meant anything to him, they meant having such opportunities.  What Dewey most admired about Chinese society was the degree to which persons were recognized in terms of their social roles and relationships, in terms of their cooperative involvement with other people.  It might strike some Americans as counterintuitive to say this, but Dewey thought that being rich in social connectedness was the key to individual freedom.

Of course, Dewey was also critical of Chinese society.  While visiting, he remarked on how China failed to effectively guarantee equal opportunities for men and women.  Both he and Alice were quite vocal about the absence of Chinese women in important professions.  While this remains a challenge for Taiwan today, there have been important strides since Dewey’s time in China.  On the island of Taiwan, the Gender Equality in Employment Act became law in 2001.  This piece of legislation aims at combating gender-based discrimination in hiring, promotion, and compensation in the workplace.  The bill passed after several years of persistent advocacy by the “Awakening” foundation (funuxinzhi 婦女新知), a non-governmental women’s rights organization established in 1982.

Thanks to such efforts, Taiwan now measures up quite well in terms of female representation in some sectors, especially politics.  Taiwan is markedly ahead of other Asian democracies in terms of female representation in its legislature, for instance.  The struggle for gender equality, however, continues.  During the 2014 election cycle, the “Awakening” foundation sought public pledges from candidates to more vigorously enforce the 2001 legislation and to seek out women for more political appointments.  The results of these efforts were mixed.  It is true, as Dewey observed a century ago, that patriarchal customs run deep in Chinese culture.  Taiwan’s progress, however, has been significant in this area.

Given the nature of the May Fourth movement, the role of “custom” in Chinese culture was something that occupied Dewey’s mind during his visit.  His thinking on the subject changed over the course of his trip.  When Dewey first arrived in China, he did not fully understand custom as a force in shaping human behavior.  During one early lecture, after announcing to his audience that he “arrived in China quite recently, and [knows] very little about either your modes of thinking or the characteristics of your society,” Dewey instructed them that it would be a “mistake” to regard custom as a source of moral education, for “customs are external to the child; they have little to do with his individual consciousness.”

Dewey’s position on the role of custom in moral education would be completely reversed by the time that he left China.  In 1922, he wrote the following: “The choice is not between a moral authority outside custom and one within it, it is between adopting more or less intelligent and significant customs.”  As a progressive modern thinker, Dewey wanted to believe that most customs were the vestiges of a pre-scientific past, and that we could detach ourselves from their influence rather easily.  His exposure to the Confucian-influenced culture of China, however, taught him otherwise.  Customs are pervasive in the lives of human beings, and they serve especially important functions in the “face-to-face” community.  Confucius called such customs li (禮) or “ritual propriety.”  Li (禮) is what holds a community together and provides the informal rules for inter-personal relations.  Dissolving customs all at once (as some “New Culture” reformers advocated during the May Fourth movement) could easily destroy a community, leaving individuals alienated and lost.

Dewey advocated thoughtful inquiry into the function of customs, and he argued that customs not serving the community should be reconstructed over time.  In the context of the May Fourth movement, his view was neither radical nor conservative – it was gradual and moderate.  His voice was one among many in this period, and he had his supporters as well as his detractors.  In the end, his voice (along with others) would be drowned out in the current of history.  Within a few decades of his visit, his influence would be recast in the politically charged climate of the 1950’s.  Dewey’s works would be repudiated, and his students would be forced to give public recantations of his thought.  In the People’s Republic of China, Dewey was portrayed as a malignant agent of western imperialism and summarily dismissed.  His most loyal supporters fled with the Nationalists to Taiwan.  Dewey died in 1952 at the age of ninety-two.  According to his daughter Jane, he never lost his affection and admiration for China and its people.  As she relates in her memoirs, China remained “the country nearest his heart after his own.”

Sometimes, history has a way of correcting itself.  In the last two decades, there has been a resurgence of interest in Dewey on Mainland China.  His rehabilitation began in the 1980’s, a period which saw the loosening of ideological constraints.  His philosophy of education reemerged first as a subject for reconsideration in 1982, with “Dewey” (Duwei 杜威) being a special topic at the annual conference of the Chinese Association for Research on the History of Education (Zhongguo Jiaoyushi Yanjiuhui 中國教育史研究會).  Soon, there were expressions of belated appreciation for Dewey as a moderate voice for reform in China.  Scholars recognized him as someone who had not wanted to completely annihilate tradition in 1919, and who had warned against going to extremes.  Such virtues were readily appreciated in the wake of the Cultural Revolution.   The article that perhaps best summarizes Dewey’s rehabilitation in China is a 1997 piece by Liu Fangtong (刘放桐) entitled, “Re-understanding and Re-evaluating Dewey.”  The essay ends with an invitation to reconsider Dewey’s recommendations for progressive reform in China.  “In a certain sense,” Liu writes, “we are back to the starting line similar to that of the May Fourth movement after going around in a big circle.”  Professor Liu went on to establish the “Center for Dewey Studies” at Fudan University in 2004.  The Center is currently engaged in translating all thirty-seven volumes of Dewey’s Collected Works into Chinese.

Each week, as I prepare for my seminar in American philosophy, I have this historical context in mind.  So far, my Taiwanese students really like John Dewey.  They see him speaking to their own concerns in areas like education, freedom, democracy, opportunity, equality, and community, and we have had many discussions about the connections between Dewey’s thinking and Chinese culture.  How my students are responding to Dewey is helping me to understand what American philosophy really means.  As a student learns, the teacher also learns.  I will leave here understanding more about American and Chinese cultures than when I arrived.  And like John Dewey, I’ll probably be a few pounds heavier too.

Jim Behuniak received his Ph.D. from the University of Hawai’i in 2002.  He is currently Associate Professor and Chair of Philosophy at Colby College.  He works in the areas of Chinese philosophy and American philosophy.  He is author of Mencius on Becoming Human (SUNY Press, 2005) and co-editor with Roger T. Ames of 孟子心性之學 Studies of Mencius on Feeling and Nature(Social Sciences Academic Press, Beijing, 2004).  He has authored several articles in Chinese and comparative philosophy for edited volumes and for journals, such as Philosophy East and West, Dao: A Journal of Comparative Philosophy,Journal of Chinese Philosophy, and Asian Philosophy.  He was Senior Fulbright Scholar teaching at National Taiwan University in 2014-2015. 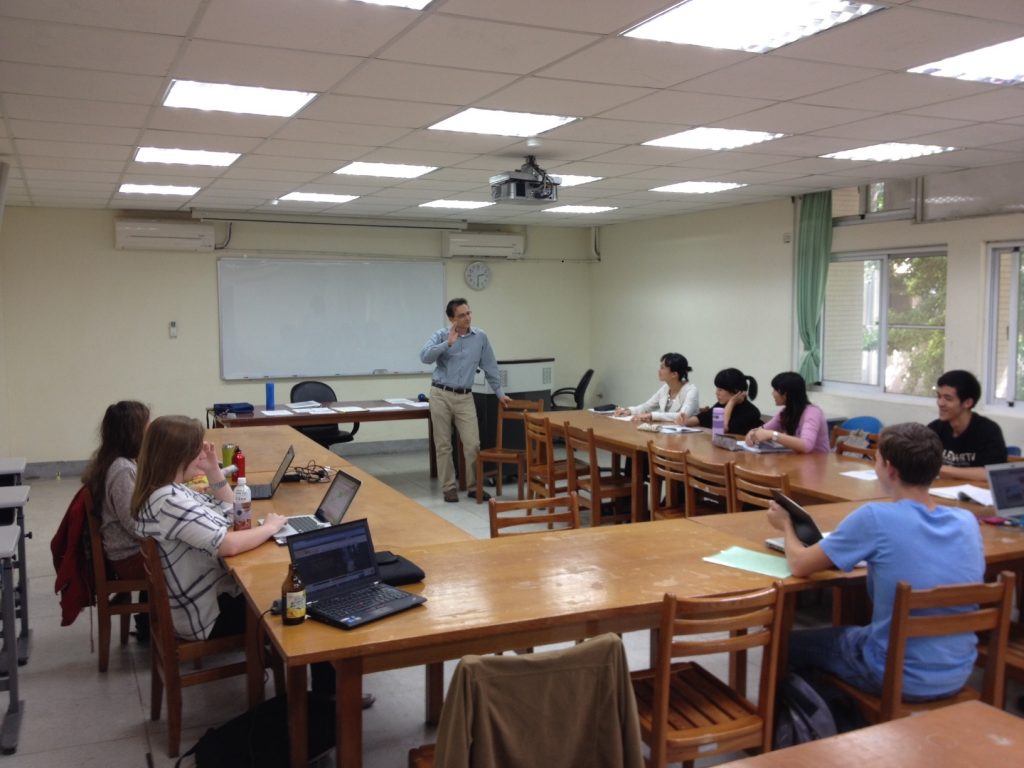